We deliver maintenance and service repairs, warranty and post-warranty performance in the entire country.

We deliver maintenance of security systems in compliance with the binding regulations and the producers’ guidelines. 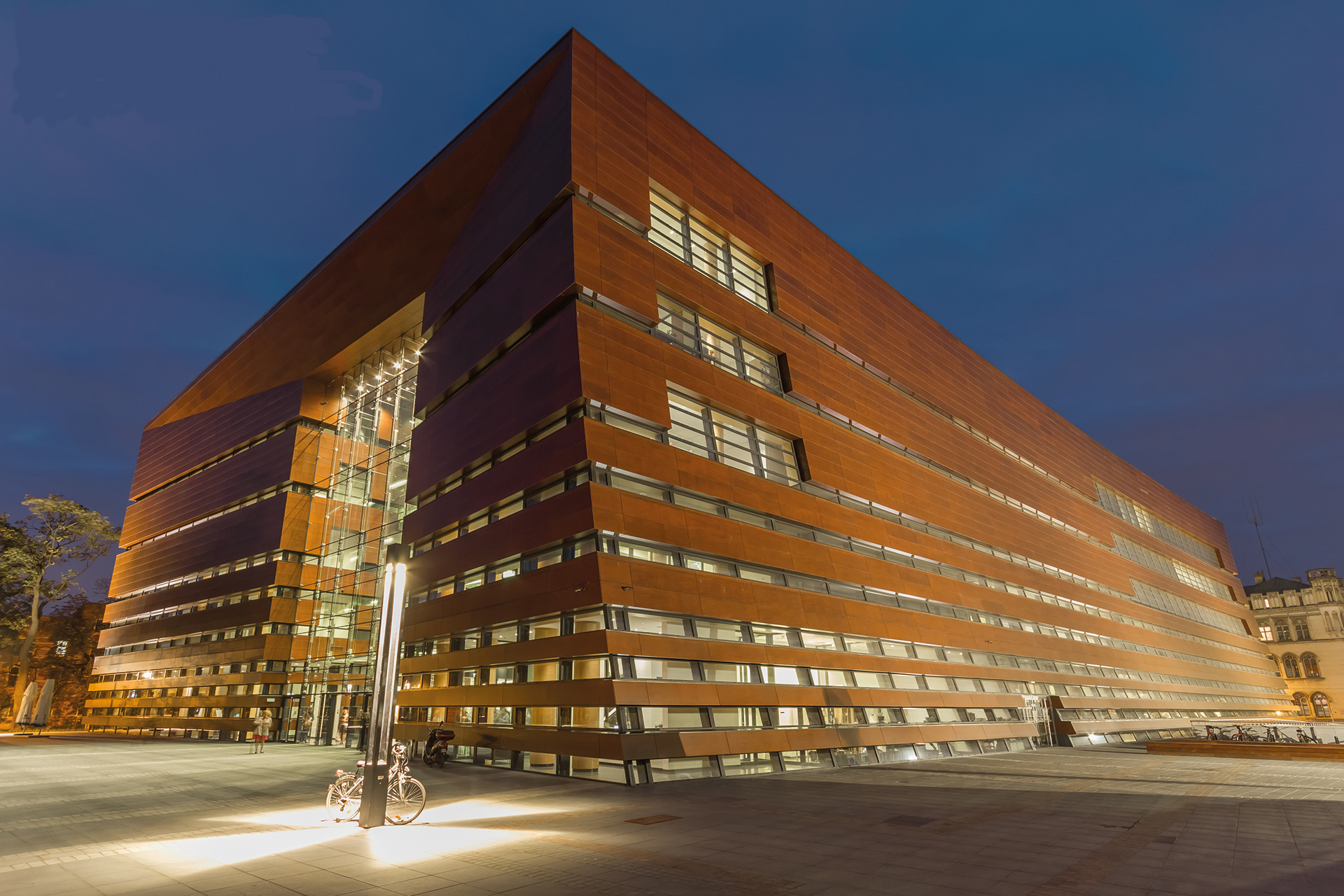 GEO-KAT has been on the Polish market for more than 15 years. The number of our employees exceeded 100. We have on board both well experienced experts in numerous fields as well as young, enthusiastic and innovative specialists. We mainly operate in Poland, but also present on foreign markets, where we constantly strengthen our existence.

For many years, GEO-KAT has specialized in the fields of low voltage installations, however, we have become experts in building automation systems and BMS, electrical installations, telecom works, delivery of solutions and maintenance for all kinds of properties. We also deliver designs and implement solution increasing the energy efficiency.

Our field uniqueness derives from the fact that we execute all variety of services, beginning with designing, through assembly and network execution, up to consultancy and installation maintenance.
... more
For many years of reliable work at high level, we have gathered recognition of the engineering environment and a reputation of a modern and trustworthy company. We have participated in most prestigious realisations in the country.

From the very beginning, we have participated in highly advanced projects in terms of technological development, thus we have been able to become recognizable on the market as an expert for difficult endeavours.

As a company with years of experience, we protect our Clients’ good image and business. Our professional consultancy, on-time, reliable and competent service constitute a solid ground for fruitful cooperation. ... less 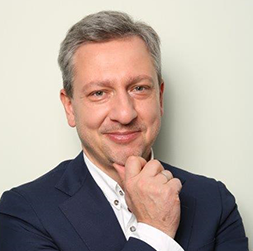 CEO and a Founding Members

Graduated from the Automation and Robotics Department of the University of Technology in Radom. Participant of many courses for Managers and supervision seminars.

Has vast experience in the execution of investments regarding system designing, realisation and system maintenance. His excellent interpersonal qualities allow for execution of highly complex projects, consistently terminated with a great success.

An enthusiast of modern economical solutions and salsa most avid fan. 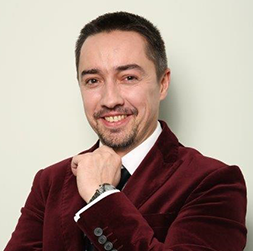 CEO Deputy and a Founding Member

Graduated from the Warsaw Technical University, Department of Automation and Robotics. A double graduand of managing studies at Brighton Business School. Completed the Course for Candidates for Supervisory Board Members in State Treasury Companies.

Has a vast experience in management and project execution. High skills in managing even the most complex tasks combined with strong-willed motivation scheme altogether constitute a unique feature on our field market.

Responsible for the Departments of Realisation and Maintenance. 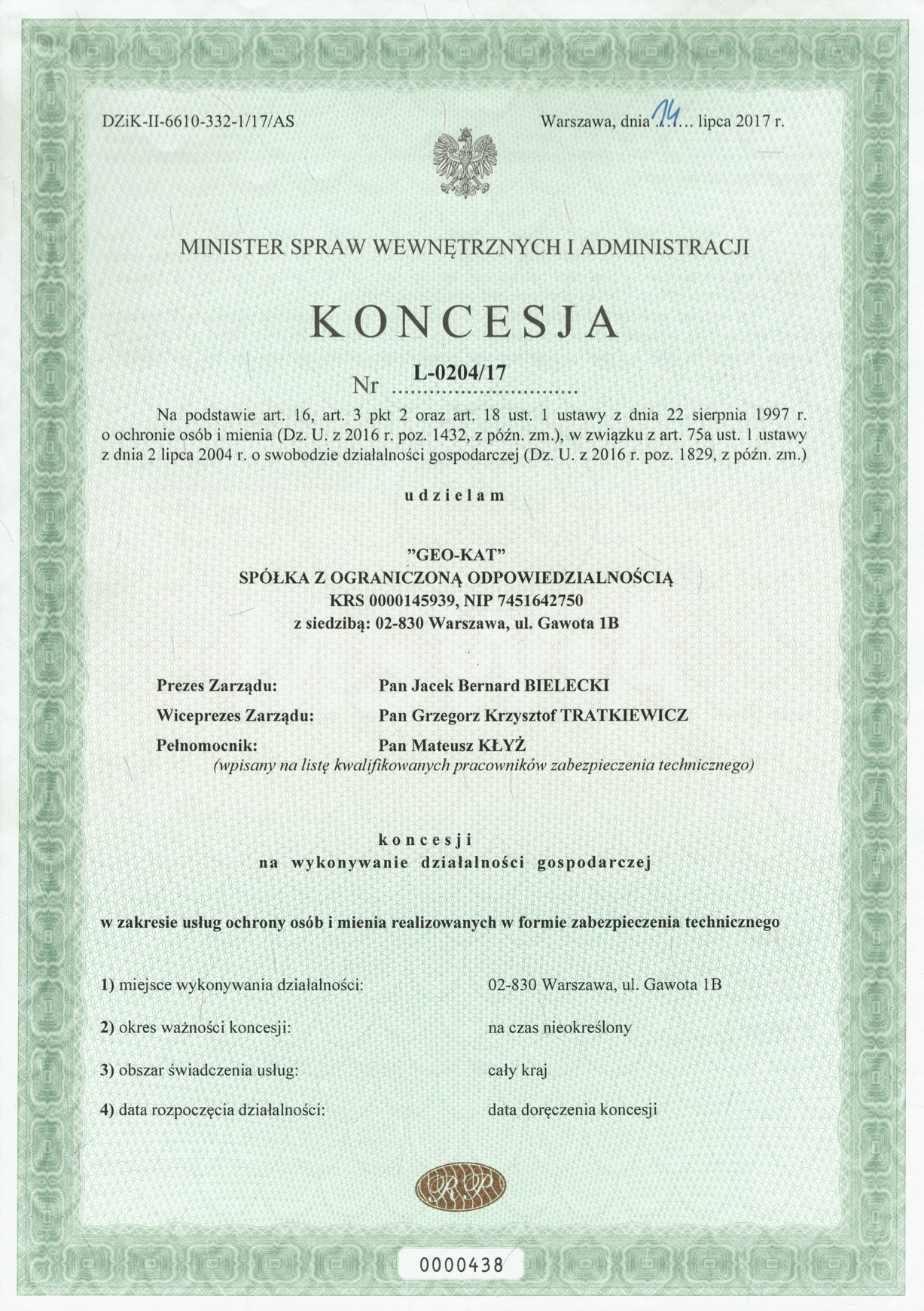 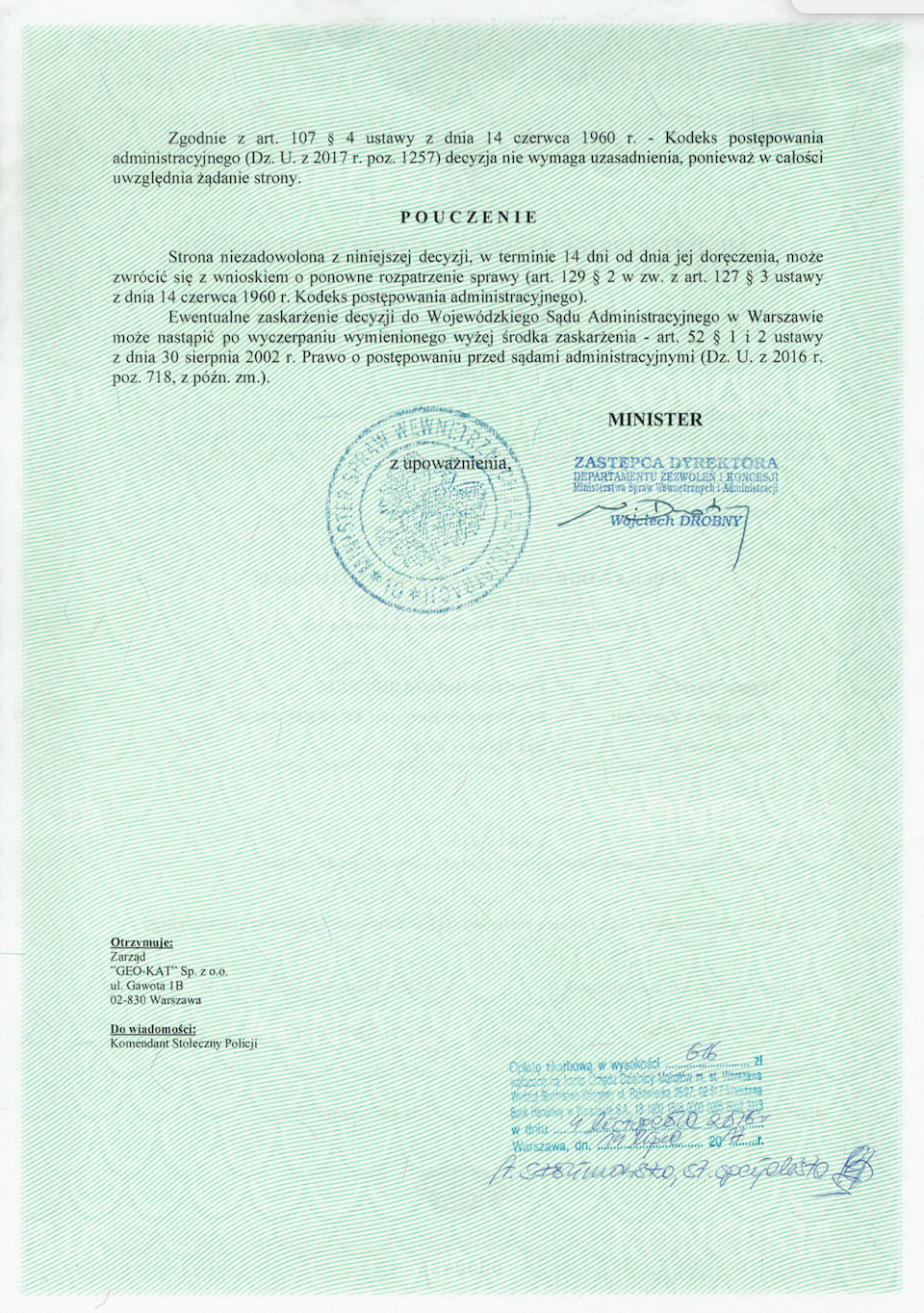 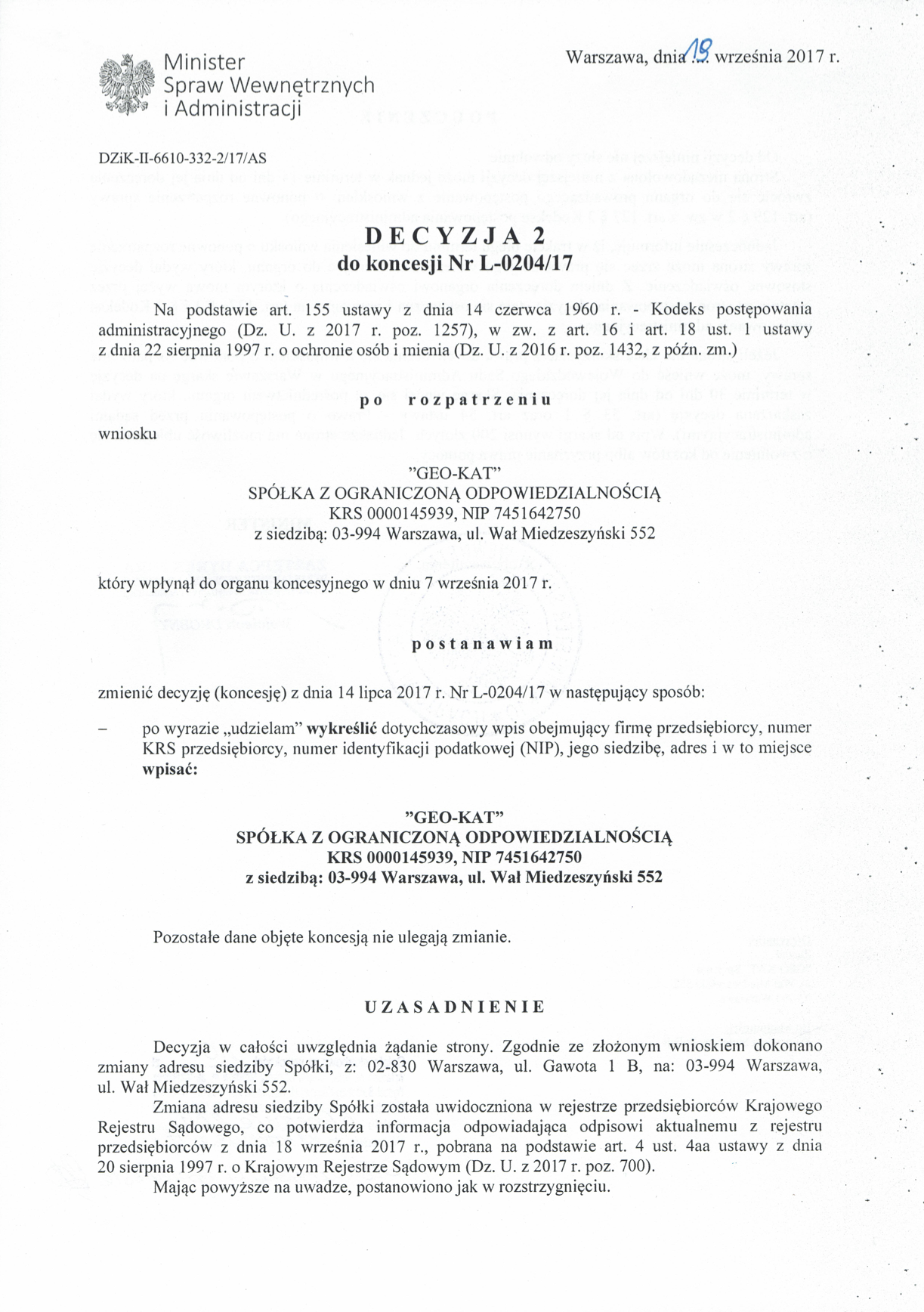 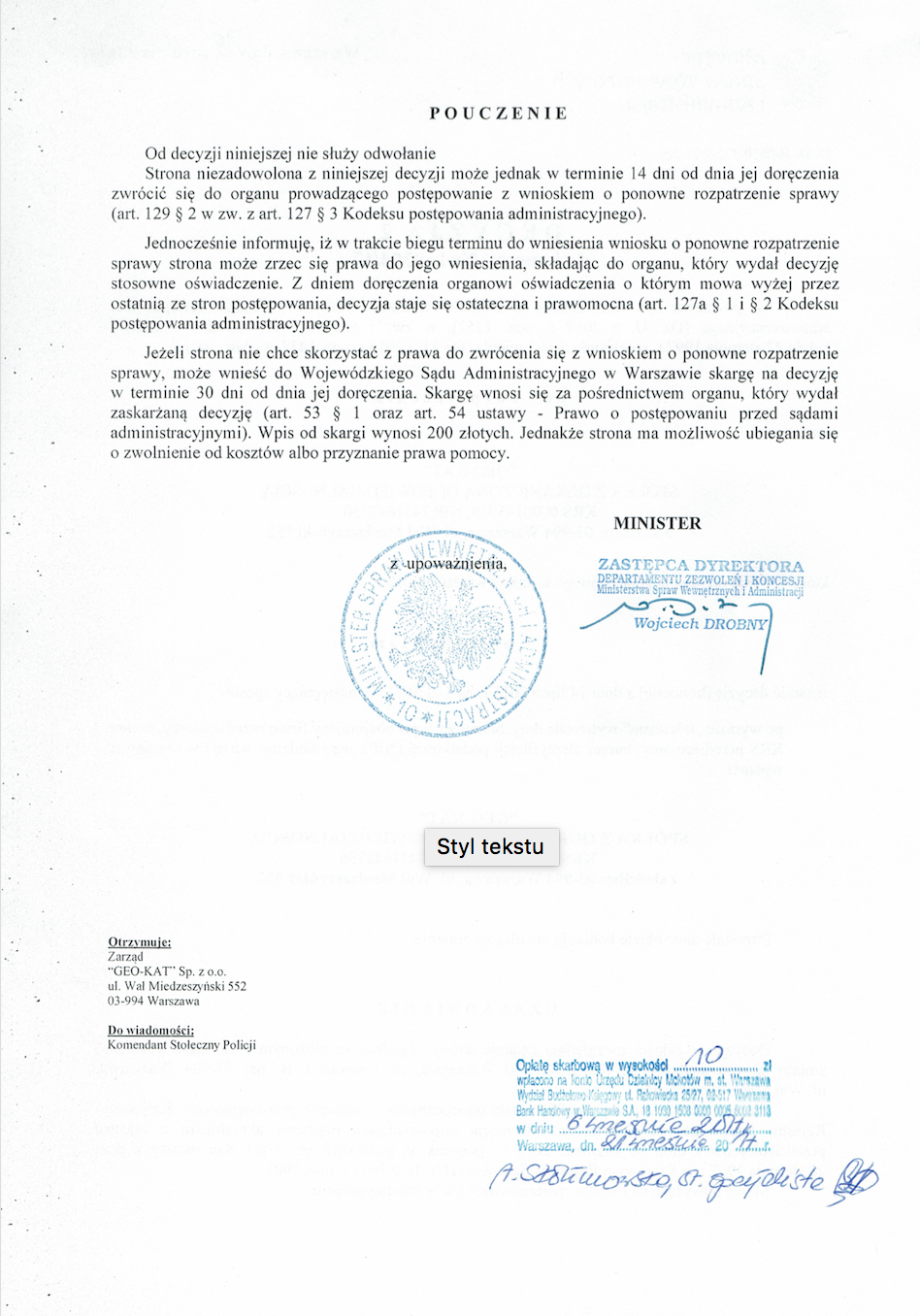 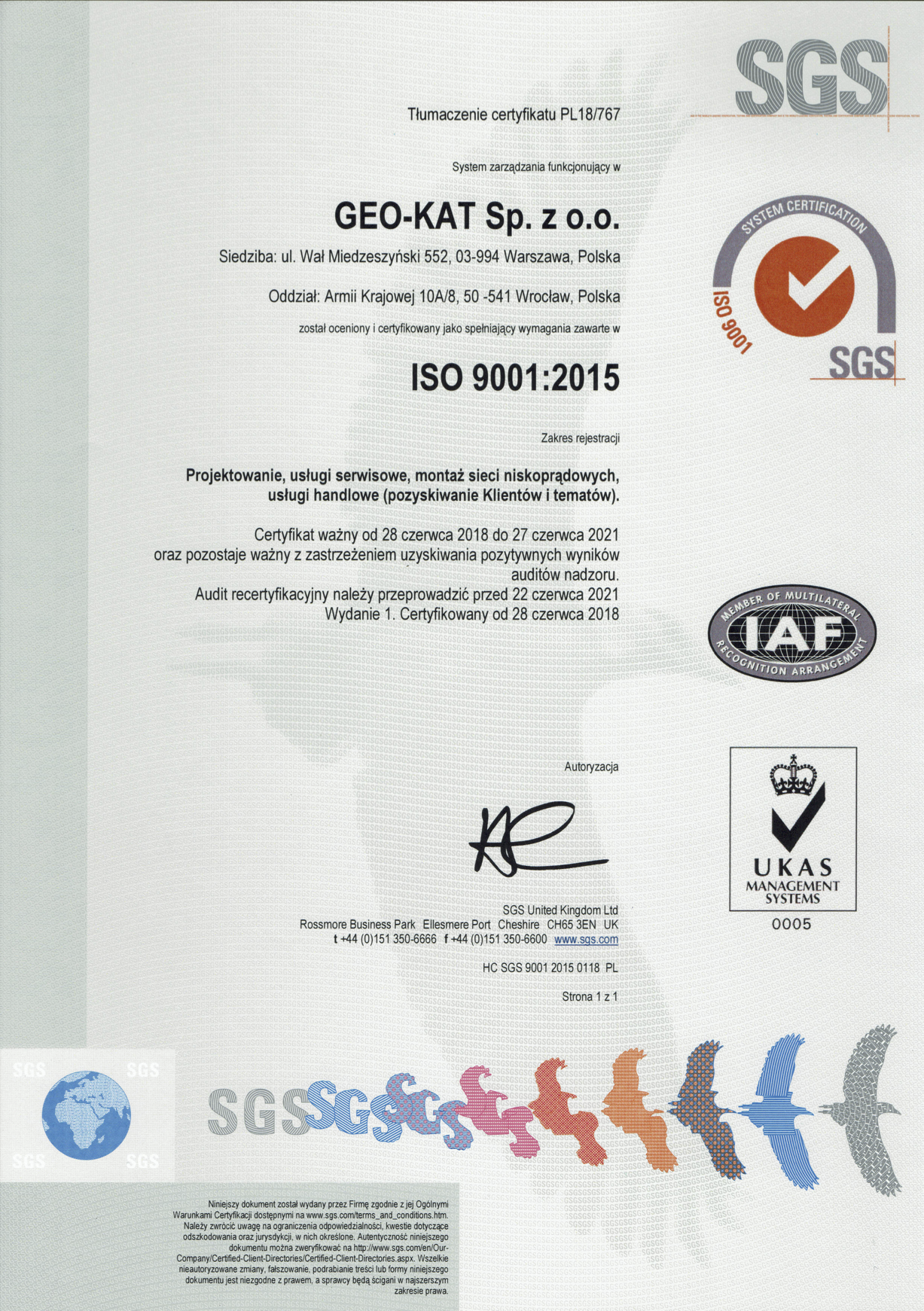 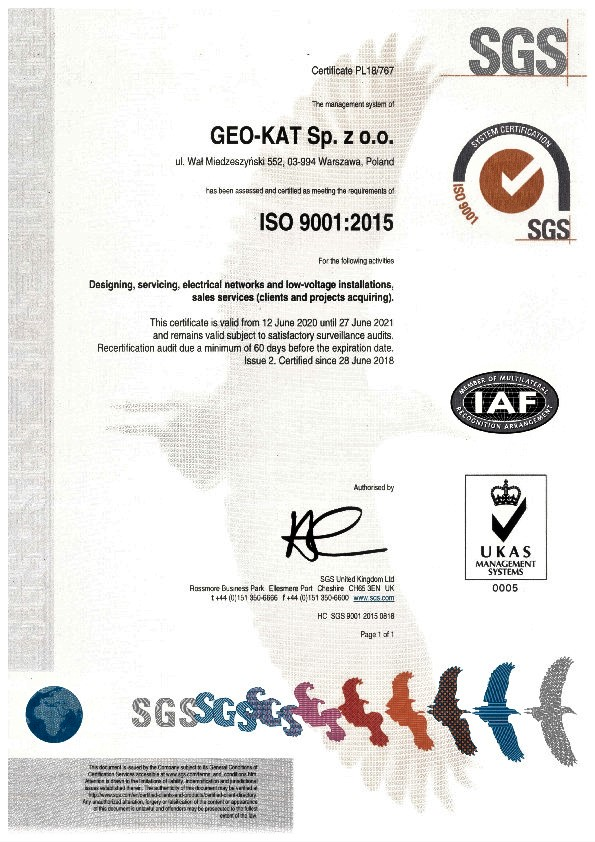 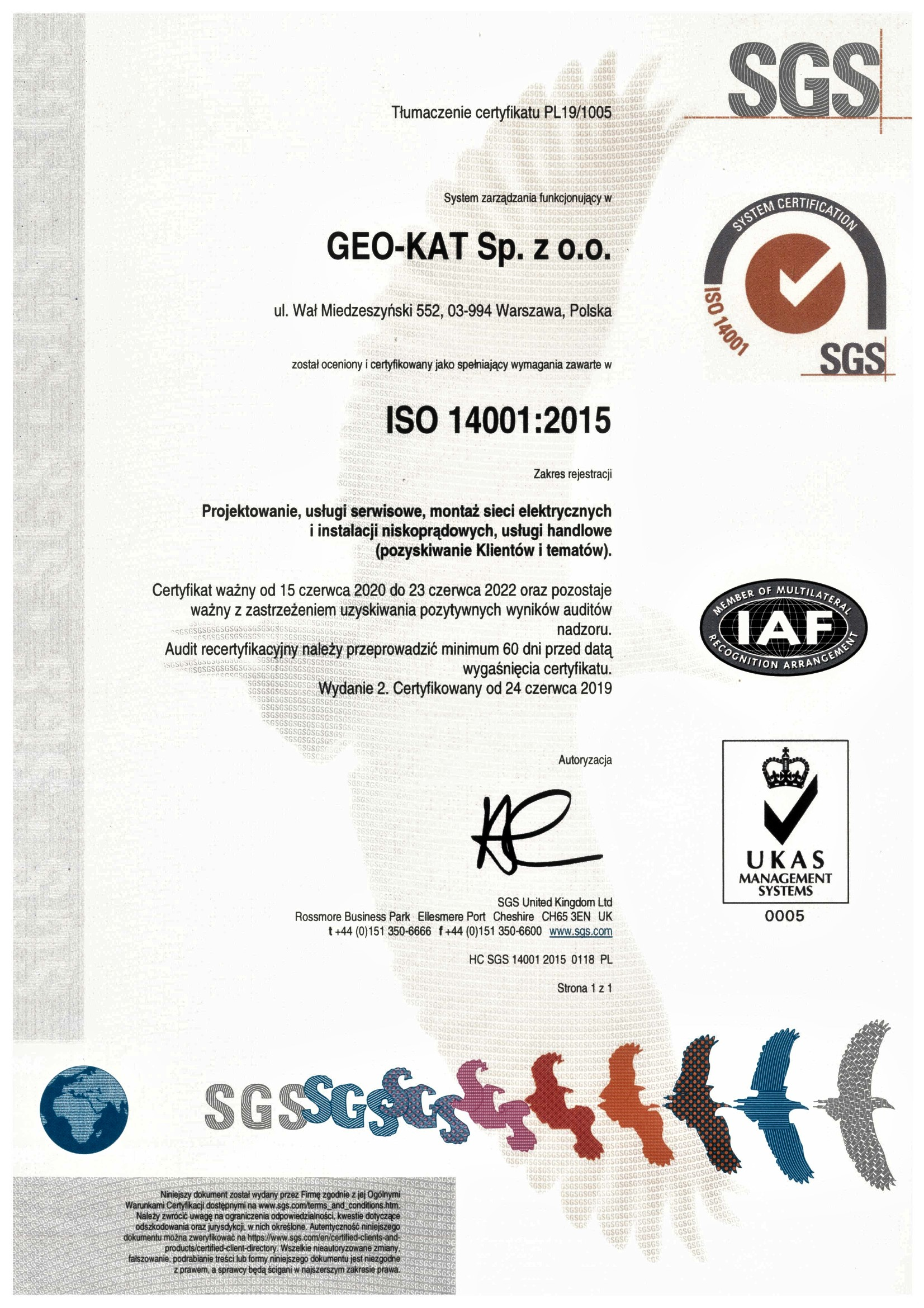 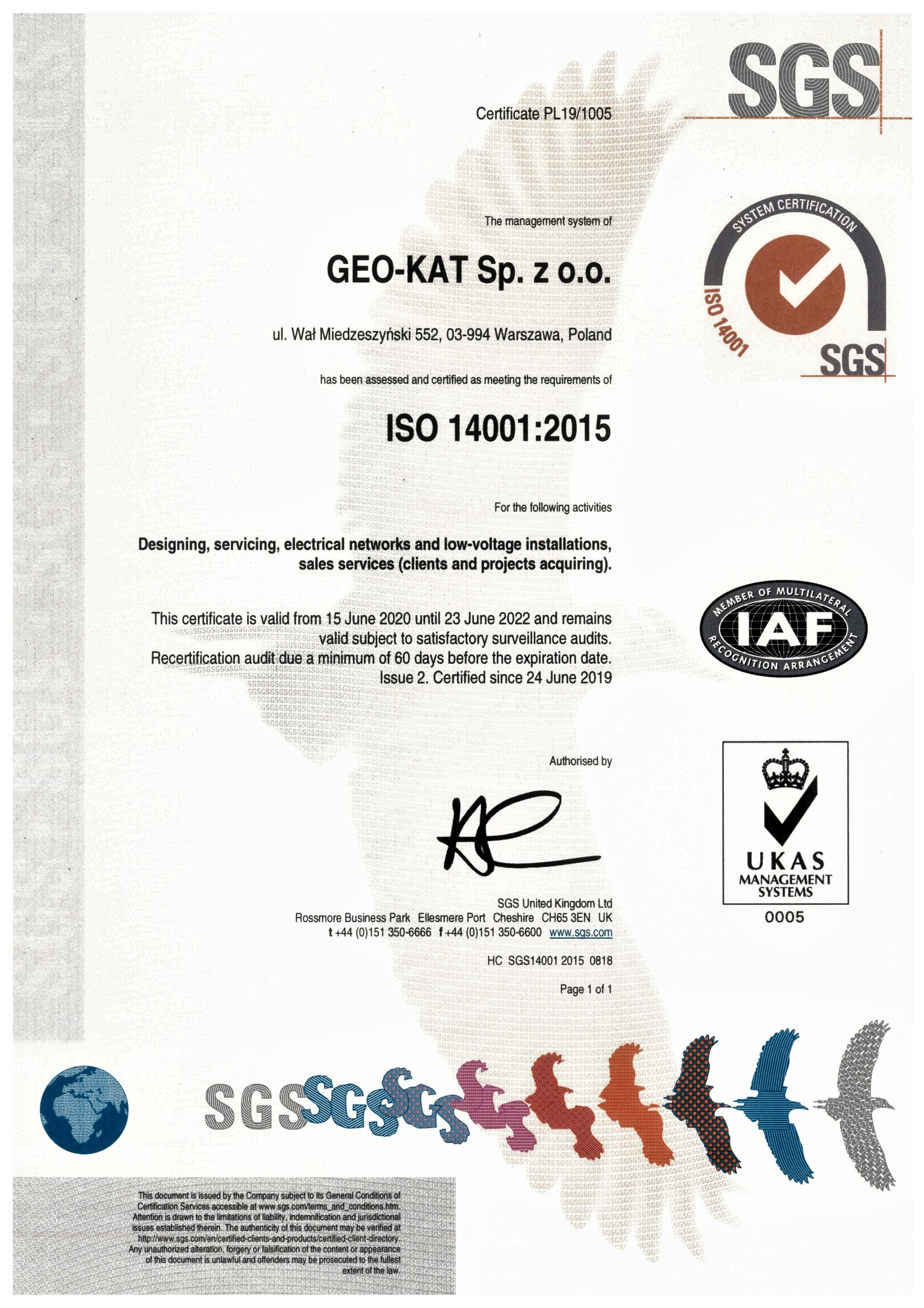 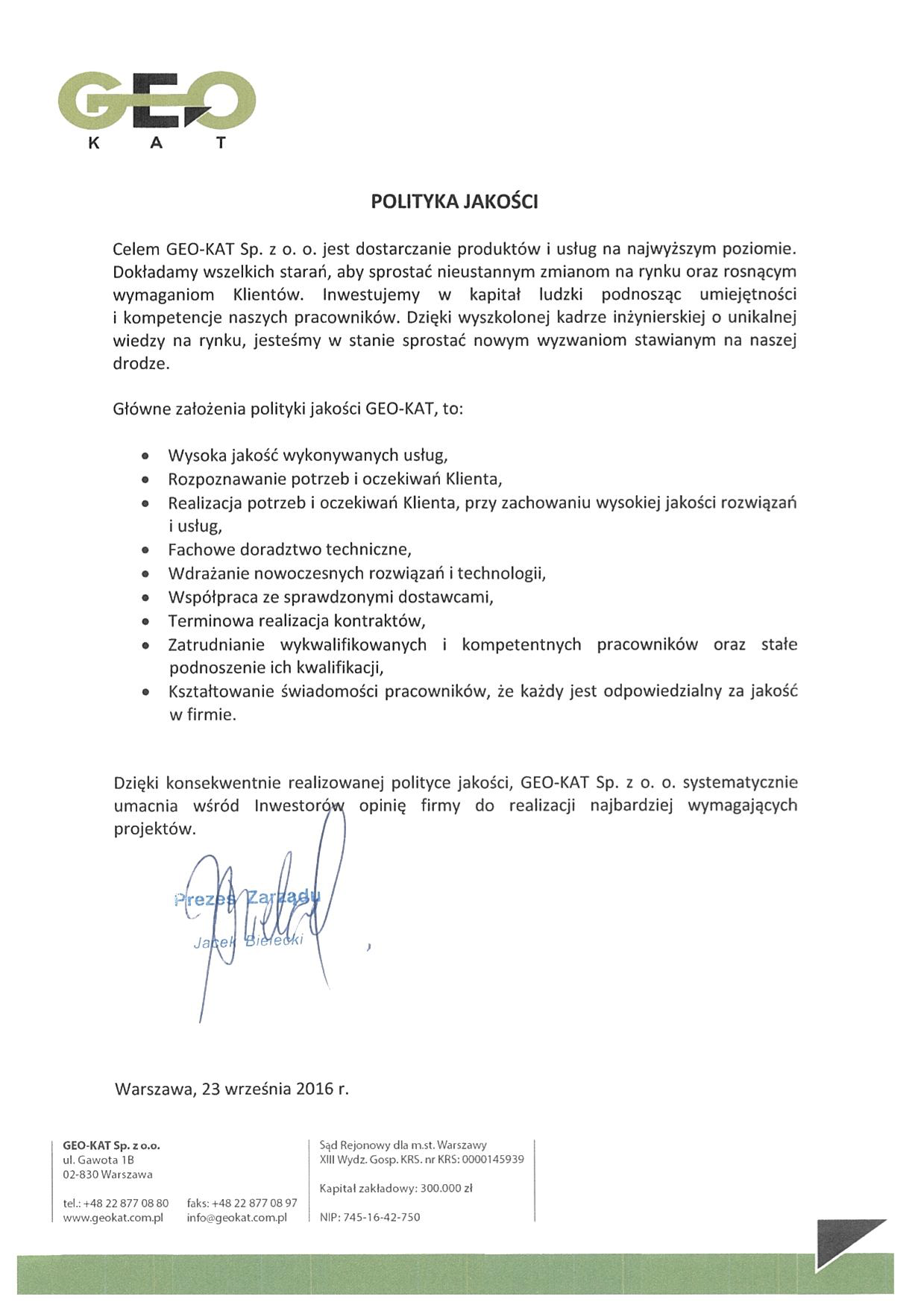 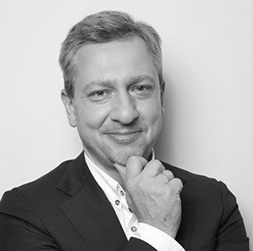 CEO and a Founding Members

An enthusiast of modern economical solutions and salsa most avid fan. 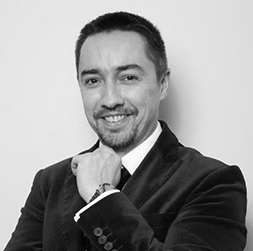 CEO Deputy and a Founding Member

Board of Directors The executive body of the GEO-KAT constitutes the Management Board consisting of:

Change of location onto Wołoska 24

Creation of cabinet prefabrication department for automation and electricity; changing of the company’s location from Aleja Prymasa Tysiąclecia 145/149 onto Taneczna Str. 7

Ringfencing of the Maintenance Department, providing servicing the executed and commissioned installations, warranty and post-warranty conservations

Extension of services onto electrical installations

Extending the offer onto the execution and installation commissioning and programming Department; creation of the low voltage installations Department

GEO-KAT is founded with two fields of expertise: designing and the Environment Protection

Founding of the design office ATRA

Access to the most hi-tech solutions. Cooperation with the leading manufacturers. Ambitious technologies.

Sustainability, financial awareness and firmness. Modern and enthusiastic approach to even the most complex projects.

We strive to be available and listen to our Clients and meet their requirements. We constantly improve our offer and introduce new products and services in order to answer the evolving field realities and more and more complex needs of our Clients.

Support at every step of the investment: beginning from design, through installation and commissioning, up to conservation and maintenance services. Searching the best and most effective solutions.

Teams creating with passion and holistic approach and Client’s support on each step of the investment. Experienced specialists together with enthusiastic young personnel. Investment into the human resources development.

Reliability and professional of the delivered services. Our motto – modernity of solutions and crossing the boundaries of the impossible.

15 years of presence on the local market, cooperation with the most prestigious investments, wide competencies, highly diversified services.

Access to the most hi-tech solutions. Cooperation with the leading manufacturers. Ambitious technologies. 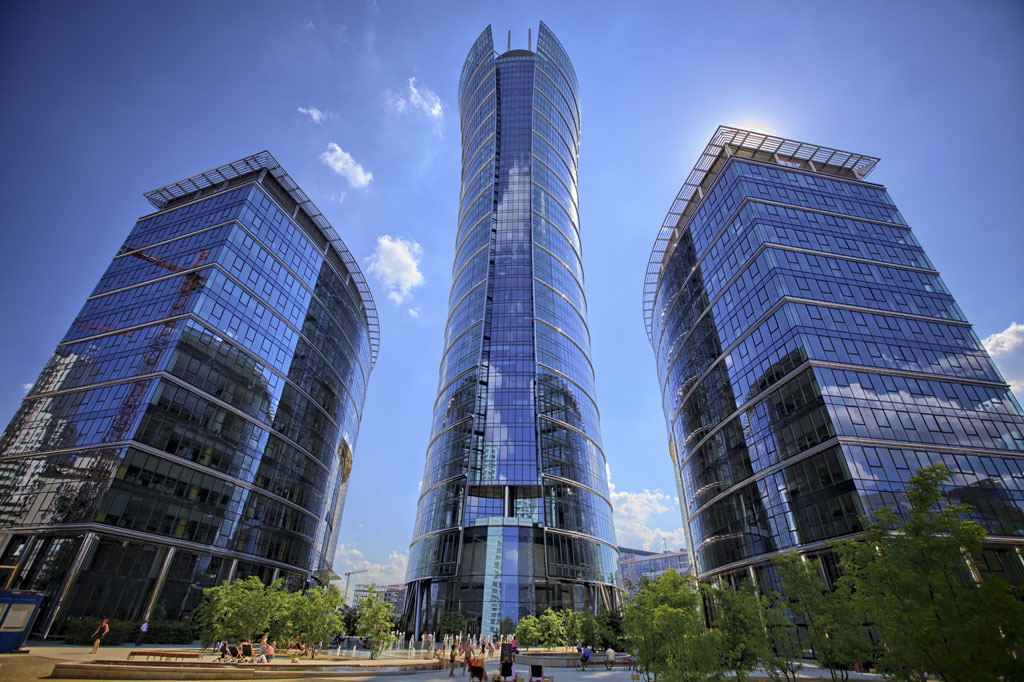 We highly emphasize best quality of our services. We are particular about project realisation and support for our Clients with the best specialists, well experienced and with unique knowledge.

Concession of the Ministry of Interior and Administration

On July 14th 2017 GEO-KAT obtained a concession of the Ministry of Interior and Administration in terms of personal and property protection service in the form of technical security.

In the area of constantly developing competition, we deeply care about our Clients’ needs and high quality of provided services, GEO-KAT has acquired a Quality Management System compliant with ISO 9001:2015 standard.

A consequent approach to the execution of GEO-KAT’s quality policy constitutes guarantee of best possible service execution and delivery of most demanding projects.

Facing new challenges, GEO-KAT mainly aims at the actions to enhance its position on the market as well as the company’s development while fulfilling all requirements in terms of saving the natural environment. Confirmation of all these attempts is acquiring the Environmental Management System Certificate, compliant with ISO 14001:2015 standard.